The Island Maintains Its Unhurried Pace

The gentle waves mimic the pace of life on Sullivan’s Island.

LOCATED WITHIN EASY driving distance of historic Charleston and just across the Intracoastal Waterway from thriving, upscale Mount Pleasant, the story of Sullivan’s Island might have turned in a totally different direction. “The Island,” as it has been known to Charleston-area residents for centuries, may have become a booming beach resort, a glitzy playground for the rich and famous, replete with magnificent beachfront hotels and pretentious restaurants.

Instead, the Island has managed to maintain a pace as unhurried as the smallish, gentle waves that tickle its broad, sandy beaches, then retreat, with equal serenity, back into the Atlantic Ocean. The few hotels that have graced its quiet streets are long gone, and its eateries, mostly along Middle Street, are more hangouts for hungry families than for celebrities hungry for attention. Its commercial development doesn’t come anywhere near matching that of the area’s other two beach communities – the Isle of Palms and Folly Beach.

With its proximity to the ocean, property values – and, as a result, property taxes – have soared in recent decades, encouraging some people to relocate to the mainland and elsewhere, but it hasn’t been all that long since Sullivan’s Island was the epitome of small-town America, a place where kids played, dreamed, went to school and grew up together, where there was no need to lock front doors, where grownups interacted daily with their neighbors and where there were no strangers, at least not for long. Until 60 or 70 years ago, part of the island was farmland. 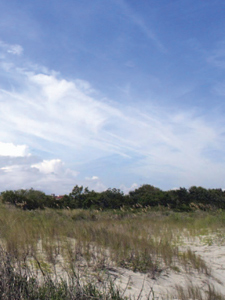 Roy Williams has spent more than six decades of his 75 years on Sullivan’s Island. As a youngster, his family lived in Charleston and had a summer home on the island, which was common for many Lowcountry families in simpler times – back in the 1940s and 1950s. The house he still lives in on I’On Street has been standing for more than a century – the materials to build it were floated over to the island by boat – and its residents enjoyed a front-beach location until the 1960s, when a road was built between the house and the sandy expanse that touches the Atlantic.

Much has changed since Williams’ World War II-era childhood on Sullivan’s Island, due in part to the status of Fort Moultrie. The fort, which played an important role in two wars, the American Revolution and the Civil War, had been rebuilt twice since the Revolution and was still in operation on the west end of the island as the United States entered World War II. When Williams went to visit his aunt, who lived near the fort, he first had to face the sentries who were guarding the area. He remembers watching small boats, some of them built at the Navy yard in Charleston, going through maneuvers on the beach near Station 9, the first stop on the island for the trolley that once carried passengers to Sullivan’s Island and to Long Island, now the Isle of Palms.

“After the exercises, kids would go out there and look for what the soldiers had left behind,” Williams said. “We’d find Lucky Strike cigarettes and sometimes even more. If a youngster found some military gear, he was the king of the neighborhood.”

The fort was shut down in August 1947 and is now operated by the National Park Service as part of the Fort Sumter National Monument.

Williams’ memories of his childhood and later on the island include visits to small grocery stores owned by the Werner, Cantwell and Simmons families, as well as a place of business named for the shape of its lot where Jasper Boulevard, Middle Street and Station 24 meet – hence the name Triangle Grocery. He also remembers fondly a candy store owned by the Smith sisters, now an artists’ studio at Station 18-and-a-half and Middle Street, and a variety store, located across from the city’s current playground. The Augusta Hotel’s location is now the parking lot for Station 22 Restaurant. 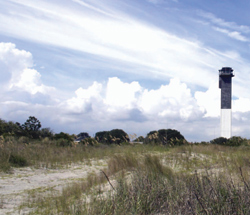 He said back in those days, the stores delivered groceries, and, each Christmas, store owners showed their appreciation to their loyal customers by giving them a Whitman sampler and a calendar. By that time of year, many businesses were struggling to make it through the winter.

“In those days, the vacation season ended on Labor Day. It was a hard time for businesses after that,” Williams noted.

Williams also “remembers,” though only through stories passed down through those who preceded him on the island, that a trolley once served Sullivan’s Island. Street names, Stations 9 through 28, hark back to the days of the Charleston and Seashore Railroad Company, which carried passengers from Mount Pleasant, across Cove Inlet at the end of Pitt Street, through Sullivan’s Island and across Breach Inlet to the Isle of Palms. The trolley served its purpose, enhancing the commercial development of the Isle of Palms, but was rendered obsolete soon after automobiles began traveling across the Cove Inlet Bridge in 1926. In the 1930s, the tracks, which ran generally along Middle Street and Jasper Boulevard on Sullivan’s Island, were torn up and sold to the Japanese as scrap metal.

Williams, who has written a book about Sullivan’s Island, pointed out another major change in recent decades. He said the demographics of the island are different, with many of his childhood friends leaving the island for financial reasons.

“It’s sad that the people I grew up with either have died or live in Mount Pleasant or other parts of the country,” he commented, adding that he also owns a home in Dillon, South Carolina, where many families have maintained their roots for decades or longer. 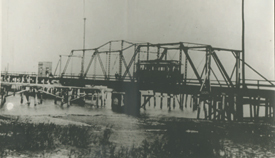 “It used to be that a lot of people had second homes here,” he said. “Now people can’t afford them. You have to have pretty deep pockets if you’re paying $25,000 a year in property taxes.”

Government entities such as Atlanticville and Moultrieville are gone, the mom-and-pop grocery stores have disappeared, the hotels are only a memory and the fort is little more than a tourist attraction. But despite the changes on Sullivan’s Island since his childhood, Williams remains confident that residents of the island are still better off than most people.

“It’s relatively uncomplicated here,” he mused. “When we cross the bridge, I think, ‘We’re going home. We’re leaving all this behind.’ Sullivan’s Island is a great place to walk or to ride a bike. There’s something very nice about being on an island.”